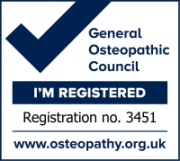 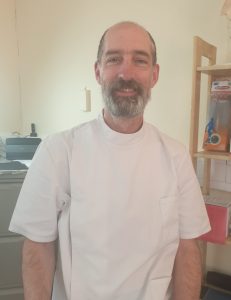 Bill Garland qualified from the British School of Osteopathy in London in 1989. Since then I have worked in the UK and overseas in a wide variety of practice settings. After moving to Coventry in 1998 I worked for 10 years at the Rugby Osteopathic Centre leaving in 2008 to become the Principal Osteopath at the Park Practice in Coventry.

Since gaining a post graduate teaching certification in 2012, Bill lectured for 5 years in anatomy to first year osteopathic students at the Stockholm College of Osteopathic Medicine in Sweden.

I subsequently became a senior lecturer in osteopathic technique and practice at the College of Osteopaths at Staffordshire and Middlesex University.

In 2021 I decided to take a break from teaching to concentrate on patients and practice.

I am currently the only practitioner at the Park Practice.

Jo Brewis currently practices from a clinic at her home in Rugby and although no longer based at the Park Practice she can be contacted at : 07790 470 810. for appointments in her home clinic.

Paula Richardson practices from a clinic at home in Daventry and although no longer based at the Park Practice she can be contacted at : 07565707428 for appointments in her home clinic.